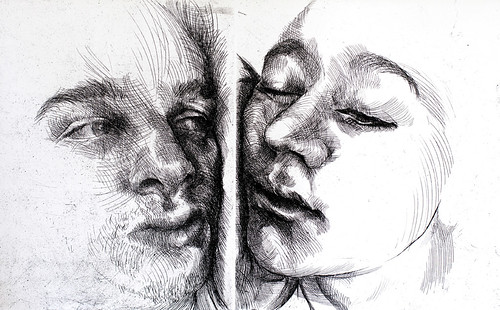 Sue Baker Kenton is an artist-educator based in North Buckinghamshire.

The subject of Sue’s etchings and lithographs is expressed in a representational way, often beginning with making marks and through them, interrogating appearances. These representational works are channels by which Sue expresses her ideas and interest in the figure in historical and contextual imagery, in literature and the interior landscape of her sitters. Sue is preoccupied by depicting the interaction and states of being of those around her.

Sue uses the process of print as an important part of her creative journey but has never been interested in producing limited editions. She comments, ‘It is about the resistance offered by the materials and processes. It is that one step of removal from the work. The final image is not the arena where the work was formed. The printmaking process demands directness.’

She began her residency at Leicester Print Workshop in October 2012 and began working on an artist led, collaborative, print project, Practical Dialogue.